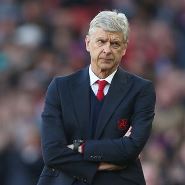 Despite their victory against Everton, Premier League’s Arsenal failed to finish the season in fourth place to qualify to next year’s UEFA Champions League. The Gunners will not be in the top continental club competition for the first time in 20 years, since French head coach Arsene Wenger took the reins in 1996.

Arsenal did their work on the final day of the league by beating Everton 3-1 although they played with 10 men from the 14th minute after Laurent Koscielny’s was sent off. Hector Bellerín, Alexis Sanchez and Aaron Ramsey scored for the Gunners while Lukaku scored the lone goal for the toffees.

However, Manchester City and mainly Liverpool, who had to drop points in their respective clashes against Watford and Middlesbrough to let Wenger’s club in, did not fail and Arsenal finished fifth.

Chelsea, Tottenham, Manchester City and Liverpool, will represent England in the Champions League next year. Manchester United could join them if they beat Ajax in the Europa League final tomorrow.

The Gunners, like Everton who finished seventh, will have to settle with their ticket to the UEFA Europa League.

In one of the most disappointing seasons since Wenger was hired, the north London club will have to decide on the continuity of the French head coach. The last straw for the fans was seeing their club miss the ticket to next year’s Champions League, something that had not happened since the 1996-97 season.

Wenger had always managed to compensate his weak Premier League seasons by finishing among the first four and qualifying to the Champions, but this season he’s running out of opportunities to save his job.

On May 27 Arsenal will face Chelsea in the final of the FA Cup at Wembley. The major London Derby could be Wenger’s last game in charge of the Gunners, or if he wins the FA Cup’s title he may save his post for yet another season.