Posted on February 9, 2018 by admin in Sports News 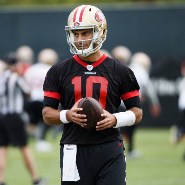 The San Francisco 49ers have committed to Jimmy Garappolo for the long term by making him the highest paid quarterback in NFL history.

According to multiple reports the Niners and Garappolo, who has started a total of seven games in his NFL career, have agreed to a five-year $137.5 million contract.

When it comes to average salary per year Garappolo’s contract is the largest in NFL’s history, surpassing Matthew Stafford’s huge deal with the Detroit Lions.

After being traded from the New England Patriots to the San Francisco 49ers back in late October Garappolo shined in his six-game stint with the Niners.

In five starts the quarterback threw for 1,542 yards six touchdowns and five interceptions while leading the 49ers to five straight wins.

This contract sets a parameter for other quarterbacks this offseason who are going to be getting new deals, such as Drew Brees, Kirk Cousins and potentially Aaron Rodgers and Matt Ryan.

The Niners know they paid a lot, but they think this deal will look a lot better in two years after the aforementioned quarterbacks sign their new contracts. They feel that signing Garappolo now gives peace of mind to the locker room and sends a message of stability to the potential free agents that are thinking of signing with them.

The 49ers think they have their franchise quarterback of the future and wanted this done as soon as possible. They are so sure about Garappolo that they didn’t want to have to franchise-tag him like the Redskins did in past seasons with Cousins.

This move will prove to potential free agents that they have a well-known quarterback in place and that they are set at the position for the foreseeable future.

Garappolo’s locker room presence will also benefit the 49ers as he brings some of the Patriots winning culture and ways with him.

He’s yet to prove he can be a true leader but knowing now that he has a long-term deal he will have the opportunity to grow and develop into one and to cement his place as the face and future of this organization.