Home » Gambling News,Sports News » THE 49ers ARE THE UNDERDOGS THIS SUNDAY

THE 49ers ARE THE UNDERDOGS THIS SUNDAY 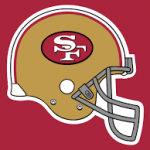 THE 49ers ARE THE UNDERDOGS THIS SUNDAY

The winningest team in the NFC so far this season has been the San Francisco 49ers.  They are 10 and 1 on the year having only lost to the Seahawks in a thriller of a game by the close score of 27-24 on a game winning 42 yard field goal in overtime by Jason Myers of Seattle.

That impressive 10-1 record is only matched by Tom Brady and his New England Patriots under head coach Bill Belichick over in the AFC. So, why are the 49ers listed as 6 point underdogs going into Sunday’s big showdown with the Baltimore Ravens?

Good question for those who have not had the opportunity to watch young Lamar Jackson at quarterback for the Ravens; those who have seen this year’s version of the Ravens in action already understand why.  They are a force to be reckoned with in any NFL stadium, anywhere.

But San Francisco is coming off of a 37-8 Sunday Night Football beat down of Aaron Rodgers and his Green Bay Packers, who went into the game at 8-3 as 3 point underdogs to the ‘Niners at Levi’s Stadium in Santa Clara.

The 49ers looked very strong on Sunday, too much so to be listed at 6 point dogs the very next Sunday. But the NFL MVP forerunner Lamar Jackson and his 9-2 Raven squad have won 7 straight games and they totally dismantled the defending Super Bowl champion Los Angeles Rams on Monday Night Football.

According to the San Francisco Chronicle, the 49ers are the first team with 10 wins to only 1 loss in about 12 years to go into Week 13 games as an underdog.  Oddsmakers are listing the Ravens as 6 point favorites but we have not seen a 10 and 1 team listed without an advantage in the point spread since 2007, and even then the favorite team failed to cover the spread.

Still in all, there are many bettors out there who think that six points is not nearly enough considering what Baltimore has been doing lately. In the last five games the Ravens have outscored opponents, including teams like the Houston Texans and the Seattle Seahawks, by a total of 202 to 62, or by about 20 touchdowns. Now that -6 starts to make some sense.

The contest will take place on Sunday afternoon at M&T Bank Stadium on the river in Baltimore, which is not a closed in facility and the weather is predicted to be inclement this weekend on the east coast, so, cold, wind and rain could be a factor as well.

As further proof that Las Vegas lines makers believe in the Baltimore Ravens, they are now the odds on favorites to win Super Bowl LIV and take the Lombardi Trophy back to Baltimore. The Ravens are now at 3-1 with the Patriots at 7-2 and the New Orleans Saints at 4-1.  The 49ers follow at 7-1 with the Chiefs at 10-1 and both the Seahawks and the Vikings are listed at 12-1.