Home » Gambling News,Sports News » RIZZO & TROUT OUT FOR THE SEASON

RIZZO & TROUT OUT FOR THE SEASON 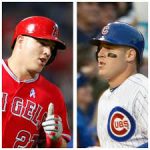 RIZZO & TROUT OUT FOR THE SEASON

Various wagering propositions and futures went through some major changes early this week as serious injuries to some very significant players has taken them out of action for the foreseeable future thus affecting their teams’ chances of winning a certain number of games or going to the Super Bowl, etc.

It was a bad weekend for some of American Sports’ most popular figures as Mike Trout and Anthony Rizzo joined Ben Roethlisberger and Drew Brees on the IL, or ‘Injured List’, for what very well could be the remainder of their respective seasons.

For the football guys, whose season is just getting underway, it could mean missing yet another chance for a Super Bowl appearance, for the baseball guys it means missing the playoffs and perhaps the World Series.

Back on September 5th Mike Trout hit his 45th homer and was in the running, as usual, for the American League MVP Award for 2019.  Then he exited the game a bit later limping visibly, and did not return.  Nor did Trout show up in the lineup for the next two games citing ‘right toe discomfort’ as the reason.

Obviously Trout’s toe issue was much more serious than he had initially let on to the public, and perhaps to his coaches and trainers as well.  Whatever, he was kept out of the lineup and underwent what is called a ‘cryoablation procedure’ for a neuroma, which is a tumor formed of nerve tissue, in his right foot and pronounced out for the season.  No wonder he had discomfort in his right toe.

So, one of the best living baseball players in the big leagues is out for the season and the Angels will surely miss him, although they have already been eliminated from postseason play for this year.

The Chicago Cubs, on the other hand, are very much in contention with the Washington Nationals for one of the two Wild Card spots available in the National League.  It could well come down to a one game, winner-take-all, contest with the Nationals to see which team will advance in the playoffs to take on the formidable Los Angeles Dodgers who have their sights set on nothing less than winning the 2019 World Series after falling short for the past two years to the Astros and the Red Sox.

However, one of the central players on the Cubs roster is everyday first baseman Anthony Rizzo who has just sprained his right ankle when he rolled on it trying to field a bunt.  Rizzo was obviously in some intense pain writhing around on the ground and observers noted that he could not put any weight on his right leg while being helped back to the dugout.

Subsequent X-Rays revealed that there were no significant breaks and the ankle injury was diagnosed as a mild sprain, although it surely didn’t look like that at the time. The Cubs All Star shortstop Javier Baez is already out with a hairline fracture on his left thumb and could be out well into the postseason.

Now with Rizzo in a walking boot and out at first base, the Cubs infield must rely on minor league call ups and otherwise bench players to fill those very big shoes as the Cubbies, who are still in contention for the NL Central as well, still have to face the red hot St. Louis Cardinals 7 times before the end of the regular season in what is ranking up to be one of the most meaningful MLB series of the whole year.

So, just like with the Steelers and the Saints before them, odds to win divisions, leagues and championships have all taken a nose dive for the Chicago Cubs and the Los Angeles Angels as well.  It was a tuff weekend.