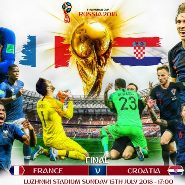 The 2018 FIFA World Cup is coming to an end and only France and Croatia are left alive, ready to clash for the title of world champion and the rights to take home the FIFA World Cup trophy.

The teams will square off at Luzhniki Stadium in Moscow on Sunday at 10 a.m. ET in a match that will be televised all over the world and is expected to be seen by over three billion people.

The French are the favorites to lift the trophy at -220, while Croatia is installed at +190 to take the trophy home. France is also a half goal favorite on the spread (-120) and Croatia is even money.

The total is set at two goals with the under at -130 and the over at +110. Keep in mind that six of the last seven world cup finals seeing two or fewer goals after 90 minutes.

Considering how good Croatia has been in the tournament it’s surprising to see France as such big favorites across the board.

Although the Croatians have been emotionally and physically drained by playing three straight games that have gone to extra times (two even reaching penalty shootouts) they are a team that has an optimum physical condition and never gives up.

Against England, they looked as the fresher team in the extra times even though they were coming off two games (against Denmark and Russia) that were decided by penalty shootouts.

The Croatians like to break teams down with their magnificent midfield play, and then strike quickly when their opponents are caught off guard so look for them to present a tough challenge for Les Bleus.

France will be ready as they are a team that has gotten better throughout the tournament. Antoine Griezmann has been an incredible leader for this team and if he has a positive impact on the final the French will not only win, but he could take home the Golden Ball trophy given to the tournament’s best player.