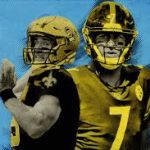 The odds on a number of NFL propositions and futures have changed dramatically after the serious injuries to two veteran All Pro quarterbacks last Sunday as both Drew Brees and Ben Roethlisberger have gone down to significant injuries taking them out of action for the foreseeable future.

The Pittsburg Steelers announced today that their veteran Pro Bowl quarterback Ben Roethlisberger is now out for the season after suffering an elbow injury in the Steelers game against the Seattle Seahawks. During the first half Roethlisberger suddenly grabbed his elbow after throwing a short pass and signaled to the sidelines immediately that he needed help.

He was obviously in a lot of pain and was escorted at once to the locker rooms for evaluation.  After contemplating various options, including a rehab program, Ben and the Steelers have announced that he will have season ending surgery to repair what seems to be very similar to what baseball pitchers go through with Tommy John Surgery, but his injury is to the UCL in the elbow.

If there is one thing that Ben Roethlisberger has proven to football fans over the years is that he is one tuff dude.  Big Ben will be back, probably stronger than ever.  You can bet on that.  In the meantime the Steelers will be in the hands of young second year quarterback Mason Rudolph out of Oklahoma State.

Rudolph took over after Big Ben went down and completed 12 of 19 passes for 112 yards and 2 touchdowns.  He did throw one pick, but it was on a deflection and not really his fault. He will be put to the test next week with the Steelers travel to San Francisco to take on the 49ers.

But without Roethlisberger the Pittsburg Steelers’ odds to win much of anything this season have taken a nose dive and any futures wagers will have to be reconsidered.  They are now projected to win only 6 games all season long.

To add insult to the injury, former Steeler Wide Receiver and favorite Roethlisberger target, Antonio Brown was catching his first touchdown pass from Tom Brady just about the same time that Big Ben was hurt.

What looked like a freak accident in the backfield as Drew Brees was releasing a pass has resulted in an injury to the thumb on his throwing hand that may keep the future Hall of Fame quarterback out for 6 weeks or longer.  This is grim news for the Saints who count on Drew to be the heart and soul of the organization, which of course he still is, even from the sidelines.

But now he is hurt and out of the lineup and Coach Sean Payton and staff will now have to rally the troops to hold it together and win games until their famed quarterback is back in action. Teddy Bridgewater, who knows firsthand about coming back from catastrophic injury is like, will take over for Brees at quarterback for the Saints.

The injury to Brees will not only change the odds out of total number of victories and who will win the Super Bowl, but also the individual achievement awards and records that Drew Brees was set to break this season, including the total number of touchdown passes in NFL history.

Peyton Manning still holds the record at 539 but both Brees and Brady are closing in rapidly with 522.   Drew Brees already holds the NFL record for the most passing yards ever with 74,845 with only Tom Brady still left with any hope of catching him.  Saints fans hope that Brees will be back in time to foil Brady’s quest.

Just as it went down for the Steelers in Three Rivers Stadium after Big Ben went down for the count, the Saints team never seemed to regain their composure after Drew Brees went trotting back to the locker room.  Both teams eventually lost their respective games in undistinguished styles.

Of course Fantasy Football players will have to reassess their picks after these two great quarterbacks have gone down for the season. There are plenty of new ones to choose from these days but, for now anyway, two of the best NFL quarterbacks in the business are sidelined for the foreseeable future.

Get well soon to both.