Online Bookies & Bettors Getting Ready Big Battle In The Bayou 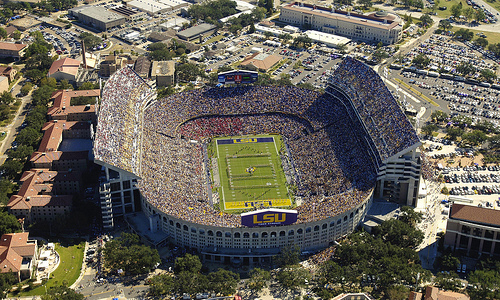 Anticipation is always high before a home game in Tiger Stadium.  There is a buzz in the air throughout southern Louisiana that is like nothing else anywhere.  The Tigers are playing at home tonight.  Get ready for a big one.  This week ex LSU Coach Nick Saban comes to Baton Rouge with his Crimson Tide football team which has been ranked number one in the nation since the rankings came out in preseason.  The Tide is undefeated so far this year.  They have not gone into any contest as less than 20 point favorites!  Are they that good or is the competition perhaps a bit week this year?  The tale will be told on Saturday evening when Alabama takes the field to take on the #5 ranked LSU Tigers at home in Tiger stadium, otherwise known as “Death Valley”.  The newly remodeled stadium, located about a mile from the Mississippi River on the LSU campus, now holds nearly 93,000 fans and will be filled to capacity this coming Saturday for the battle between arch rival Alabama.

The LSU Tigers had the luxury of relaxing and watching their competition play on television Saturday. LSU no doubt was most focused on Jacksonville, Florida where Florida and Georgia battled for control of the SEC East Division — and Tuscaloosa, Alabama, where the Tigers’ next two opponents, Alabama and Mississippi State, battled in prime time for sole possession of first place in the West.  At the end of the day, LSU saw what had been two of the remaining three unbeaten teams in the SEC — Florida and Mississippi State — join it among the oneloss teams in the league.

The Gators, who handed the Tigers their only defeat this year, lost to Georgia 17-9 and relinquished control of the division to the Bulldogs, who can win it by beating Ole Miss and Auburn.  The Bulldogs found out first-hand why Alabama is the # 1 team in the country. The Crimson Tide steamrolled Miss State 38-7. It was Bama’s final tune-up before heading to Tiger Stadium on Saturday.

LSU and Alabama are the two best teams in the SEC, and winner will still represent the SEC’s best shot at extending its streak of six consecutive national champions. This week’s game will determine who’s the favorite to win the West, as well as the overall conference title.