Jon Gruden Will Reportedly Sign With The Oakland Raiders 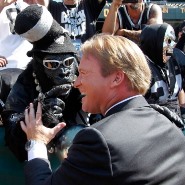 The Oakland Raiders are calling a press conference on Tuesday to announce the hiring of Jon Gruden as the team’s new head coach, according to a league source who confirmed to ESPN’s Adam Schefter on Friday.

The timing of the news conference was first reported by the Raiders Snake Pit website.

NFL Network Insider Ian Rapoport reported the Raiders are preparing to sign Gruden to a 10-year, $100 million contract, by far the most lucrative contract for a head coach in the NFL.

Gruden, who coached Oakland from 1998 to 2001 and has been working as an analyst on Monday night’s ESPN broadcasts, will return to the Raiders to replace Jack Del Rio, who was fired after the final game of the regular season on Sunday.

Gruden’s first tenure with the Raiders ended shortly after the “Tuck Rule” loss to the New England Patriots. He was then traded the following month to the Tampa Bay Buccaneers for two first-round draft picks, two second-rounders and $8 million.

Gruden beat the Raiders in the Super Bowl in his first season with the Buccaneers but didn’t win another playoff game for Tampa Bay in his final six seasons. He has a 95-81 career record.

ESPN reported on Saturday that Raiders owners Mark Davis was prepared to sign Gruden to a lucrative contract that included shares of the team’s ownership group, something that would have to be approved by the rest of the NFL owners.

The NFL said Friday that the Raiders already met the requirements of the so-called “Rooney Rule,” which requires owners to at least interview minority candidates for coaching vacancies, according to Joe Lockhart, the executive vice president of communications for the company. NFL

The Raiders have not identified other candidates for the vacancy of head coach.