Date With Niners Should Put Seahawks Back On Track 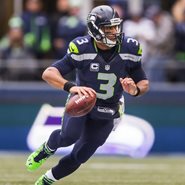 The San Francisco 49ers (1-9) host the Seattle Seahawks on Sunday (6-4) as they try to win back-to-back games for the first time this season after losing nine in a row.

The 49ers defeated the hapless New York Giants 31-21 last week to earn their first win of 2017, but the odds of winning again this week are not good as they face a Seahawks team that is trying to get on the winning track once again after losing a heartbreaker to the Atlanta Falcons last week.

Although the 49ers are playing at home, they have not had success against Seattle on their own turf as they have lost four straight games in San Francisco by a combined point differential of 42.

Unlike previous years the Seahawks offense will not use a run-and-pound strategy to defeat the 49ers, opting instead to throw the ball.

Even though the Seahawks are not doing a good job of protecting quarterback Russell Wilson, he’s managed to earn 82.8 percent of Seattle’s scrimmage yards this season. He’s not only the team’s leading rusher, but he’s managed to help Seattle win several close games even though he’s been forced to scramble as the pocket constantly collapses around him.

His ability to pass on the run and earn yards on the ground have so far allowed him to successfully escape tight situations where he’s been blitzed, but Seattle must do a better job of protecting Wilson or it will be a matter of time before he gets injured.

Another Seahawks unit that needs to improve is their defense as it has allowed 251.5 passing yards per game since week 8, which ranks them 23rd in the league.

It’s true that Seattle’s is nursing several key injuries, most importantly the one to cornerback Richard Sherman, but the replacement players are playing nowhere near an acceptable level.

For example, the Seahawks staff knows that Jeremy Lane can’t put Sherman-like numbers, but he has to do something to raise his game to a level of play where he can be productive because until then seasoned quarterbacks will continue to target him.

The 49ers have almost no running game and also have problems protecting their quarterback, so Seattle’s defense may be able to get their pass rush going to make life miserable for quarterback C.J Beathard.

While the Seahawks have some problems and their defense is banged up, the 49ers are a team in disarray and have bigger issues than Seattle.

Despite the optimism and confidence boost that finally earning a win may give, San Francisco is widely overmatched in this game and the Seahawks should earn their fifth consecutive victory on the road against the Niners.