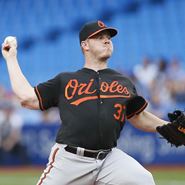 The Baltimore Orioles (35-80) return to Camden Yards for the first time since July 29 to begin a four-game series against the surging Boston Red Sox (81-35).

The Orioles finished their recent road trip at 3-6, and their offensive production was the only bright spot over that stretch. Over their last 12 outings, the Orioles scored 80 runs while going 6-6.

While the O’s are 3-5 in August and have lost three of their last five games, the Red Sox are now running away with the division as they lead the A.L. East by eight games over the second place New York Yankees.

Note: Over his last five starts, Bundy has gone 1-3 with a 6.75 ERA. Eovaldi has won back-to-back starts while notching 15 scoreless innings since moving to Boston, and he owns a stellar 4-1 record and 2.32 ERA over his last seven appearances.

Game 1
David Price (11-6, 3.93 ERA)
Jimmy Yacabonis (0-0)
Note: Yacabonis has allowed nine runs on fifteen hits over 11.1 innings (two starts) with the Orioles this season. Price has been in outstanding form during his last four starts as he’s posted a 2-0 record and a 2.00 ERA over his last 27 innings combined.

Note: Ramirez has posted a 10.80 ERA over 11 2/3 innings during his last three contests. The Red Sox have yet to name a starter for this game.

Note: Cobb has recorded a superb 2.37 ERA over 30 1/3 innings over his last five starts. Sale has a 5-0 record and a microscopic 0.59 ERA over his last seven games. During that span, he’s allowed just three runs over 46 innings of work while also striking out a whopping 78 batters.