AFC Playoffs: Steelers Looking For Payback As They Host Jaguars 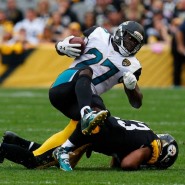 The Jacksonville Jaguars (11-6) visit the Pittsburgh Steelers (13-3) for Sunday’s AFC Divisional Round game, which will feature a phenomenal matchup between the Steelers explosive offense and the Jaguars outstanding defense.

Jacksonville’s defense, led by defensive end Calais Campbell, and cornerbacks Jalen Ramsey and AJ Bouye; is ranked second in the NFL in points per game, total yardage allowed and sacks; while it ranks first in passing yardage allowed.

Those are huge qualities to have when you face an offense led by Ben Roethlisberger, and that includes wide receiver Antonio Brown and running back LeVeon Bell.

The Steelers offense this season ranked 8th in points per game, third in total yardage and passing yardage, and their offensive line finished in a third-place tie for the least sacks allowed in the league.

This game happens to be a rematch, as these teams already faced off this season in week 5 when the Jaguars defeated the Steelers in Pittsburgh 30-9 in a game where “Big Ben” self-destructed with five interceptions.

That game announced to the rest of the NFL that the Jaguars defense was for real and that Jacksonville was finally a candidate to not only make the playoffs but win their division, which in the end they did.

But a key player matchup that will go a long way determining the outcome of this game will be between Jags running back Leonard Fournette and Steelers’ safety Mike Mitchell.

These two players clashed often and hard against each other in October and will for sure clash again because Mitchell wants to pay the rookie back for the drubbing he and the rest of the Steelers defense took back then.

In round 1 Fournette rolled over Mitchell and company as he rushed for 181 yards and two touchdowns. If Fournette and the rest of the Jaguars rushers once again get things going and start breaking big runs it could be another long day for Pittsburgh.

On the Steelers side, LeVeon Bell had in that first game just 47 yards in 15 carries, but he has come a long way since. Don’t expect such a poor effort from him in this one.

First, because the Steelers will try to use him more in Sunday’s cold weather, and second because he fixed his early-season problems to finish third in rushing yards (1,291), rushing yards per game (86.1) and rushing touchdowns (9).

Playoff experience is a big factor when two evenly matched teams face each other and in this case that favors the Steelers, as they are facing a quarterback who last week played his first postseason game.

Blake Bortles did help Fournette lead the Jaguars to that October upset, but the playoffs are a completely different matter.

Bortles must prove that he can walk into Heinz Field once again and defeat the Steelers in their hostile environment, surrounded by rowdy fans and a frigid weather that wasn’t there the first time around. But most importantly, if the Jaguars are to win this game he must take care of the ball and avoid turnovers at any cost.

He will have to score at least two touchdowns, throw no picks and prevent sacks because they usually result in two things that the Jaguars simply can’t afford in this game: lost yardage and giveaways.

If Bortles hesitates to throw the ball away, keeps the ball too long or makes throws into double or triple coverage the Steelers will simply run away with this ball game and move on to the AFC Championship game.

As for the Steelers, although Roethlisberger had a terrible game in week 5, they are still fortunate to have a guy like him at the helm, as he has ample postseason experience and won two Super Bowls.

Expect Roethlisberger to have learned from his mistakes in the previous game against this stingy defense. He may not have a huge game, but you won’t see him throwing more than two interceptions in this contest.