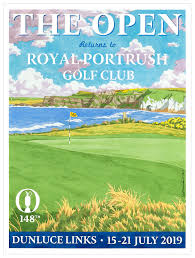 For the first time since 1951 the British Open, aka The Open, will be played on the historic links known as the Royal Portrush in Northern Ireland on the windy shores of the North Atlantic Ocean beginning on July 18th.

Local golfing hero Rory McElroy will be there amongst the favorites at 10-1 to win the event along with #1 ranked Brooks Koepka at 6-1 and Masters winner Tiger Woods, who has eschewed all other professional events since his roller-coaster rounds at the US Open where he turned in a strong finish giving his fans, and bettors, hope for the future.

Woods has won the British Open three times in the past and he racked up PGA Major win number 15 this year at Augusta National.  Tiger is listed at 12-1 for The Open this year along with the ever dangerous Dustin Johnson who is predicted to make a strong run for the cup as well.

Oddsmakers don’t seem to think that surprise US Open Champion Gary Woodland is likely to win back to back majors as they have him listed at 50-1 for The British Open this year. US Open runner up Rory McElroy is on a roll this spring and is expected to finish in the top 10 at Royal Portrush.

The Royal Portrush itself is amongst the oldest and most venerated golf courses in the world dating its origins all the way back to 1888 when the links were established around a triangle of giant sand hills overlooked by the ruins of the 13th century Dunluce Castle, which gives its name to one of the two 18 hole courses located at the Royal Portrush.

The Open will be played on the Dunluce links, which are considered to be one of the top 10 golf courses on the tour.  The British Open was first played in 1860 in Scotland at the Prestwick Golf Club and is the only ‘major’ on the PGA tour that is played outside of the USA.

On July 18, 2019, 156 of the top golfers on the planet will be there to tee off on the Dunluce Links to begin another round of The British Open.  Projection models are looking for a strong showing from young Patrick Cantlay, currently listed at 25-1, who has racked up 8 top ten finishes in 15 starts!